For years, there have been shocking allegations about the sexual behavior of both Bill and Hillary Clinton reported in mainly conservative media, but neither Bill nor Hillary has been indicted unlike their good friend Jeffery Epstein who ran “Sex Slave Island,” and the Lolita Express where under age children were sexually exploited, which, both enjoyed on numerous occasions.

However, that may be about to change. There is no one closer to Hillary Clinton than her close confidant and senior aid Huma Abedin, who is under investigation after the FBI discovered approximately 650,000 emails that were stored on her and estranged husband Anthony Weiner’s shared computer.

So, what will the FBI learn about the Clinton sex scandals from those emails, and will that information be shared with the American public, probably not. 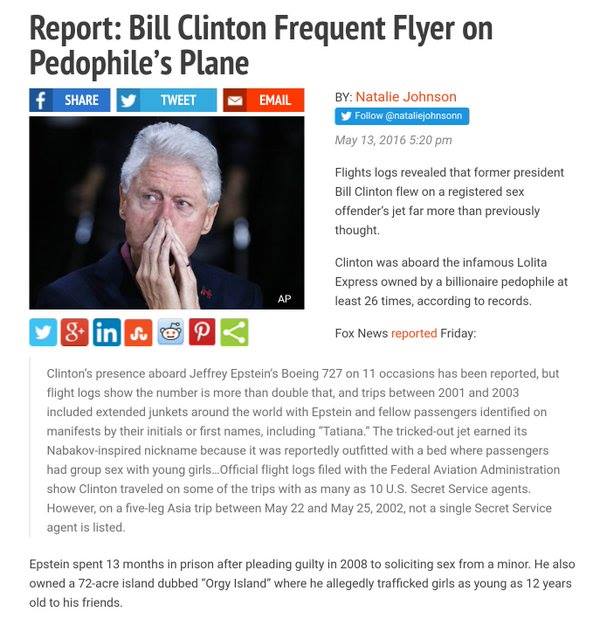 As it turns out, Blackwater founder and former Navy SEAL Erik Prince told Breitbart News Daily on SiriusXM that according to one of his “well-placed sources” in the New York Police Department, “The NYPD wanted to do a press conference announcing the warrants and the additional arrests they were making” in the Anthony Weiner investigation, but received “huge pushback” from the Justice Department.

Sex trafficking and pedophilia is alive and well in the upper echelons of our society.  This is disturbing but needs to be exposed.  Please note the “artwork” on the walls of John Podesta’s home.

This has made it almost impossible to get the truth out to the populace about the presence and penetration of this worldwide Satanic Pedophile Network.

Those editors of the major mass media and elected or appointed officials that are not part of it or compromised by it realize that to try and expose it results in an immediate loss of their job, their retirement, and they will be blacklisted and perhaps even have their lives threatened.

Notwithstanding all these strong suppression forces in the past, not only was the CIA’s Franklin Credit Union pedophile scandal exposed by the Washington Times, but the finders scandal was exposed by US News and World Report.

And, despite those highly public exposures, the Major Mass Media failed to promote those important stories; and the stories died out, with no corrective actions by federal LE, which we now know is dirty to the core, because its own leaders are fully compromised by this Pedophile Network.

[ Note: This article is based on police investigatory reports… personal documented testimony of enraged policemen and women. The story itself has major credibility; and the facts presented here have been corroborated by hundreds of investigators, LE and private in the USA, UK and other nations. PJ]