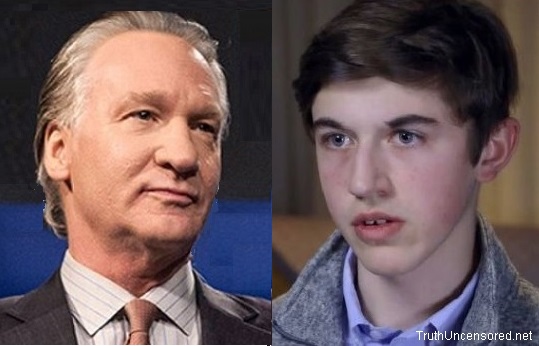 In his opening monologue on Friday’s edition of HBO’s Real Time, Maher took specific aim at Sandmann, who was filmed standing face-to-face with left-wing Indigenous activist Nathan Phillips as he beat on a ceremonial drum as different demonstrations took place at the Lincoln Memorial.

“I don’t blame the kid, the smirk-face kid. I blame lead poisoning and bad parenting. And, oh yeah, I blame the fucking kid,” Maher said of Sandmann. “What a little prick. Smirk-face!” “Like that’s not a dick move to stick your face in this elderly man’s [face].”

There is nothing funny about Bill Maher’s performance, it’s very disturbing, and the people laughing at his vicious attack on a child is horrifying. They all know that Nathan Phillips approached the children, yet Maher continued lying about it, and worse than that, he continued to feed the frenzy to destroy not only 16-year-old Sandmann, but Covington Catholic High School as well.

In a statement after the footage went viral on social media, Sandmann said that he tried to remain “motionless and calm” in front of Phillip’s, and even smiled “because I wanted him to know I was not going to become angry, intimidated or be provoked into a larger confrontation.”

“This smirking kid says he was just trying to defuse the situation. Really? Next time you get into a fight, try that,” Maher continued. “I do not spend a lot of time around Catholic schoolchildren. But I do not get what Catholic priests see in these kids.”

On Friday, it emerged that Sandmann’s family had hired an attorney reportedly planning to sue various media outlets for libel, after countless reports falsely accused him and other students of “taunting” and “surrounding” Phillips in an act of mockery.

However, further video of the incident appeared to show a different story, that in which the school kids remained in the same place as a group of religious activists hurled racial abuse while Phillips began aggressively beating his drums in the teen’s faces.

There is a lot of controversy surrounding Phillips, who at first portrayed himself as the victim saying that he was surrounded by the teens, when in fact it was Phillips who had approached the boys who were waiting for their bus.

Native American activist Nathan Phillips, whose confrontation with Covington Catholic High School students went viral, has a criminal record, including assault and escape from prison, according to a report.

Philips has become the focal point of the clash with the Kentucky students, after initially claimed that the students blocked his exit and taunted him with abusive and racist chants.

New additional footage that emerged over the weekend has since debunked his version of the event, showing him approaching the students rather than the students taunting him. He later claimed he tried to defuse a clash between the students and a group of black street preachers who were shouting racist insults at both the Native Americans and the white kids.

At the beginning of the controversy, Phillips largely avoided scrutiny. But according to the Washington Examiner, Phillips’ past includes being arrested and charged with escaping from prison, assault, and several alcohol-related crimes.

In 1974, Phillips pleaded guilty to assault charges and was fined $200. In later years, he faced numerous other charges and arrest. He was also sentenced to one year of probation stemming from charges of alcohol possession by a minor, the report said.

His military service record was also called into question. The Marine Corps confirmed to Fox News on Wednesday that Phillips never served in the Vietnam War and wasn’t deployed overseas.

Phillips, then known as Nathaniel R. Stanard, served in the Marine Corps Reserve for four years before leaving in 1976 with the rank of private. During his time in the Marine Reserve, he was a refrigerator technician and anti-tank missileman.

This appears contrary to his remarks to Vogue, where he said, “You know, I’m from Vietnam times. I’m what they call a recon ranger. That was my role.”

Numerous outlets, including the Washington Post and the Detroit Free Press, have issued corrections to their articles that incorrectly identified Phillips as a Vietnam War veteran, noting Phillips’ lack of deployments to the war.

Since the controversy, Phillips has since offered to visit the Covington school and lead a dialogue about cultural understanding.

Covington Catholic student Nick Sandmann, seen in the viral video with Phillips, told NBC’s “Today” show on Wednesday that he’d like to speak with Phillips as well.

Since the controversy, Phillips has since offered to visit the Covington school and lead a dialogue about cultural understanding.

Covington Catholic student Nick Sandmann, seen in the viral video with Phillips, told NBC’s “Today” show on Wednesday that he’d like to speak with Phillips as well. 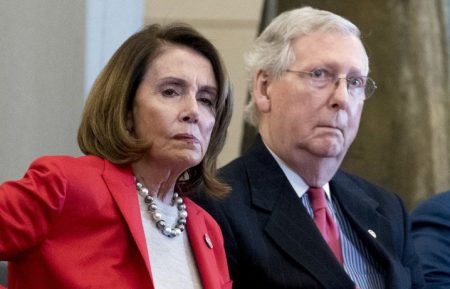 Joe Biden Takes Swing At Former Boss, Barack Hussein Obama, Over What He Did During His Presidency
January 18th, 2020 Right Wing Tribune