Donald Trump has been barred from making a speech in Westminster Hall on his state visit by Commons Speaker John Bercow, The Daily Mail reports.

The Speaker is one of three ‘keyholders’ for the ancient hall who must agree to its use and if he refuses to cooperate it will be impossible for Theresa May to extend a speaking invitation to the US President.

He was applauded by MPs after branding Mr Trump racist and sexist but despite its acclaim from MPs the speech is likely to provoke a diplomatic headache in No 10 and at Buckingham Palace.

Mr Trump’s executive order provoked protests around the world and has been suspended by US judges as unconstitutional. 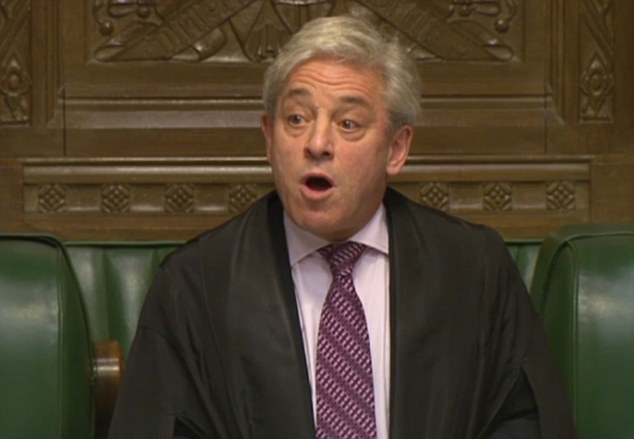 Speaker John Bercow, pictured rebuking Donald Trump in the Commons today, said his opposition to a speech in Parliament by Donald Trump had been increased by the President’s migrant ban 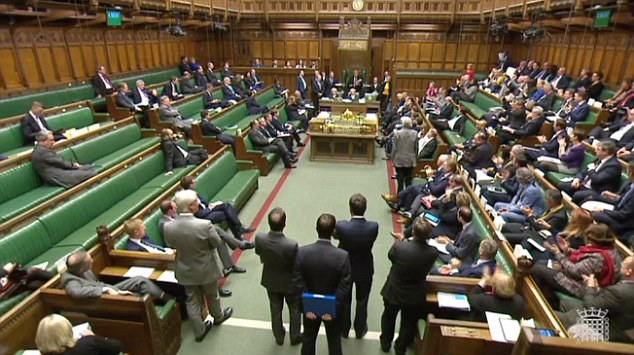 Speaker Bercow was applauded by MPs after his intervention, prompted by a point of order from Labour MP Stephen Doughty

He told MPs: ‘What I will say is this: an address by a foreign leader to both Houses of Parliament is not an automatic right, it is an earned honour.

‘Moreover, there are many precedents for state visits to take place to our country which do not include an address to both Houses of Parliament.

‘Before the imposition of the migrant ban, I would myself have been strongly opposed to an address by President Trump in Westminster Hall.

Mr Bercow said he has less influence over whether a speech could be made by President Trump in the Royal Gallery because it is in a different part of the building.

But he told MPs it was customary for an invitation to be sent in the names of both speakers of Parliament – himself and Lords Speaker Lord Fowler.

‘I would not wish to issue an invitation to President Trump to speak in the Royal Gallery,’ he told MPs.

Mr Bercow concluded: ‘We value our relationship with the United States; if a state visit takes place that is way beyond and above the pay grade of the Speaker.

‘However, as far as this place is concerned I feel very strongly that our opposition to racism and to sexism and our support for a equality before the law and an independent judiciary are hugely important considerations in the House of Commons.’ 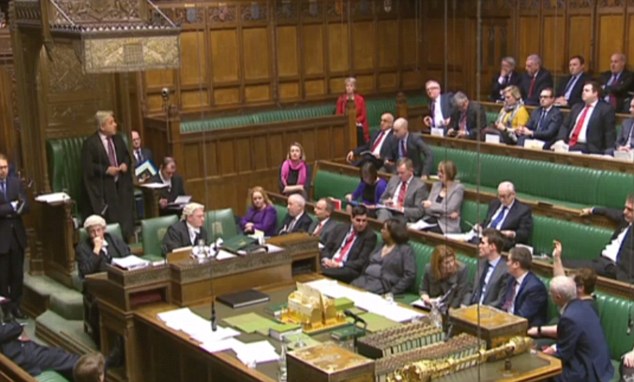 Mr Doughty raised his point of order after tabling a Commons motion opposing Mr Trump’s speech. It has been signed by 163 MPs – mostly from Labour and the SNP.

But the intervention was slammed by ex-Ukip leader Nigel Farage who said: ‘For Speaker Bercow to uphold our finest parliamentary traditions, he should be neutral.’

No 10 sources played down the intervention, insisting the itinerary for the visit had not been set and would be discussed ‘in due course’.

Mr Trump is due to visit Britain for a state visit later this year. A normal part of the programme would be a speech to MPs and peers in Parliament.

Barack Obama addressed Parliament in Westminster Hall while Bill Clinton and Ronald Reagan used the opulent Royal Gallery, which is behind the House of Lords.

Prime Minister Theresa May extended an invite for a state visit on her trip to Washington earlier this month – marking the earliest invite for a new US president in decades. Donald Trump, pictured at MacDill airforce base today, is due to visit Britain for a state visit later this year. A normal part of the programme would be a speech to MPs and peers in Parliament

Commons speakers are among the most powerful people within the Westminster system but they are expected to be independent.

By tradition, when elected speakers are literally dragged to the Commons chair.

But once installed convention dictates they set aside their own politics to stand up for the rights of all MPs.

‘Trump’s State Visit should not go ahead.’

Liberal Democrat leader Tim Farron said: ‘This is the right decision by The Speaker.

‘The Prime Minister might wish to kowtow to the nasty misogynist that now sits in the Oval Office but no-one else does.

‘We do not want him to speak to us. He is not welcome. ‘Speaking within Parliament is a rare honour, the highest honour we can offer.

‘In the past we have hosted speeches from leaders in equality, justice and human rights from Mandela to Obama to Aung San Suu Kyi. Trump is not fit to shine their shoes.’ 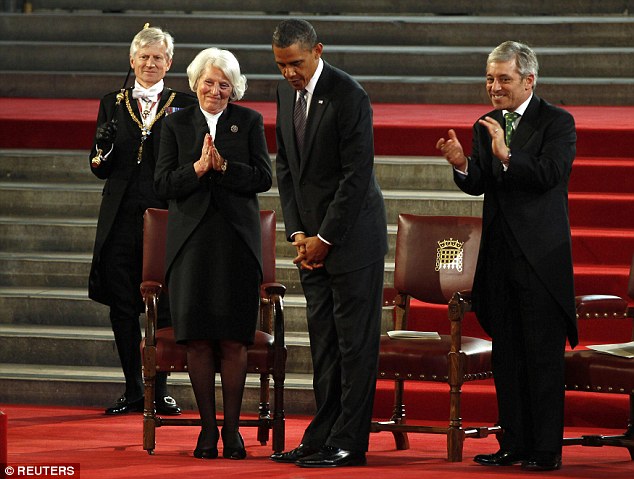 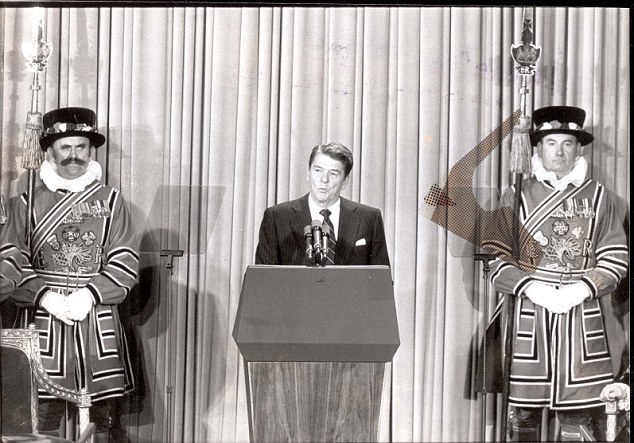 Other leaders – such as President Ronald Reagan in 1982, pictured – have addressed MPs and peers from the opulent Royal Gallery behind the House of Lords