Harry Potter’s ‘invisibility cloak’ appears closer to reality as a Canadian camouflage manufacturer has applied for patents on its ‘Quantum Stealth’ material.

A Canadian camouflage manufacturer has been making progress in achieving the science fiction concept of the cloak of invisibility a reality.

From Hollow Man to Predator, from Hogwarts to The Incredibles: the fantasy of being invisible has been a fixture of our entertainment for centuries.

Its real-life potential is groundbreaking: best witnessed by Hyperstealth Biotechnology, who have applied for patents on its ‘Quantum Stealth’ tech.

Check out the video from Hyperstealth below:

While not packed with the same vanishing capabilities of the Hogwartz boy wizard’s cloak, it effectively conceals whatever is behind it – here’s how it works.

By using lenticular lenses (which you’ll be familiar with if you’ve seen those fancy 3D DVD covers), the ‘inexpensive and paper-thin’ technology bends light around a target to alter its position or make it vanish altogether, leaving only the background visible.

Hyperstealth released a lengthy video explaining the technology, displaying its usage by covering a miniature tank with a small piece of the material – as you’ll (not) see, the tank is covered.

What’s great about ‘Quantum Stealth’ is it requires no power source, therefore it has near-unlimited usage, can be used during the day or night and is incredibly cheap to produce.

As per The Telegraph, Hyperstealth said:

One piece of Quantum Stealth can work in any environment in any season at any time of the day or night, something no other camouflage is capable of.

Hyperstealth CEO Guy Cramer demonstrates another example in the video, using the material to obscure himself with a handheld riot shield – the technology has been demonstrated to hide a target in the infrared, ultraviolet and thermal spectrum. 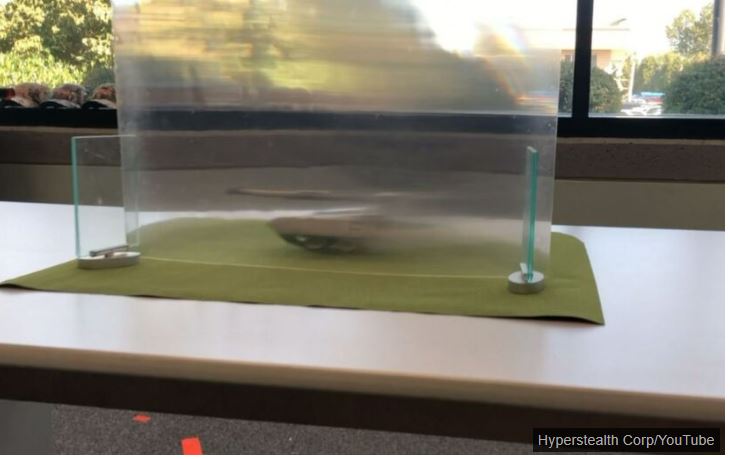 Cramer started developing the tech back in 2010, and since then has been working with military organisations to speed up the process.

IFLScience explained the principle behind this tech is called Snell’s law:

You can see the effect easily. Get a glass of water and put a spoon in it. It will appear bent. The same effect makes pools appear shallower than they are. When light moves between two materials, the angle at which it is moving will change depending on the refractive index. So by being clever with materials it is possible to construct something that has a blind spot. And that’s where the invisibility happens.

The latter would be used to detect surroundings at a higher resolution via LIDAR systems.

If you’re still confused (I am a bit), have a look at Hyperstealth’s full video here.