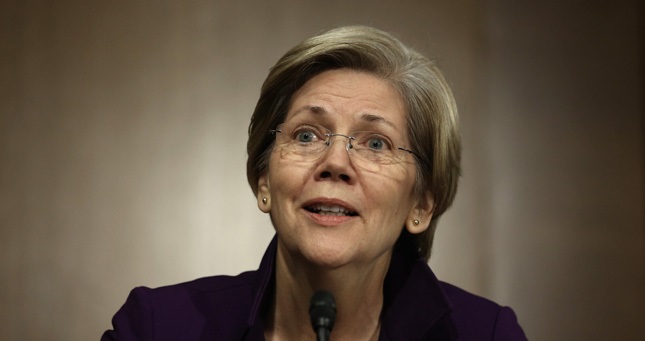 Sen. Elizabeth Warren refused a Massachusetts newspaper’s suggestion that she take a DNA test to prove her Native American heritage.

“I know who I am and never used it for anything,” Warren said Sunday in an interview on NBC’s “Meet the Press.” “Never got any benefit from it anywhere.”

Warren doubled down on her disputed story about her heritage in a recent TV appearance, but a genealogist expert says her story just doesn’t add up.

Warren appeared on “Fox News Sunday,” where she was once again grilled about her long-standing claim to be Native American, and told a story about how her racist paternal grandparents objected to her parents’ wedding because of her mother’s Cherokee blood. The couple, she said, was forced into a Depression-era elopment.

“You know, my mom and dad were born and raised out in Oklahoma, and my daddy was in his teens when he fell in love with my mother,” said the Massachusetts Democrat. “She was a beautiful girl who played the piano. And he was head over heels in love with her and wanted to marry her. And his family was bitterly opposed to that because she was part Native American.”

As a result, “eventually my parents eloped,” Warren said.

But The Washington Times reported that Cherokee genealogist Twila Barnes wrote in a 2016 blog that the story doesn’t make sense. Barnes, who has researched Warren’s family and found no evidence of Native American ancestry, researched the marriage of Pauline Reed and Donald Herring and found it appeared to be an ordinary wedding.

“The problem with Warren’s story is that none of the evidence supports it,” Barnes wrote. “Her genealogy shows no indication of Cherokee ancestry. Her parents’ wedding doesn’t resemble an elopement. And additional evidence doesn’t show any indication of her Herring grandparents being Indian haters.”

The wedding was performed by a prominent Methodist clergyman, not a justice of the peace, Barnes found. She also noted that a detailed wedding announcement was posted in the local newspaper in Wetumka, Oklahoma.

“If Ms. Warren’s parents eloped due to her mother being ‘Cherokee and Delaware’ and it was such a disgrace, why did they rush back to Wetumka the same day they were married and proudly announce it to everyone?” asked Ms. Barnes. “If there was shame associated with the marriage and it caused so many problems, why was it happily announced in the local paper?”

Warren touted her supposed Native American roots while becoming a tenured law professor at Harvard, but skeptics have demanded evidence. With the Massachusetts senator reportedly mulling a 2020 presidential run, The Berkshire Eagle newspaper has said she should take a DNA test to dispel or confirm the doubts once and for all.

Warren said Sunday she is neither planning to run for president nor take a DNA test.