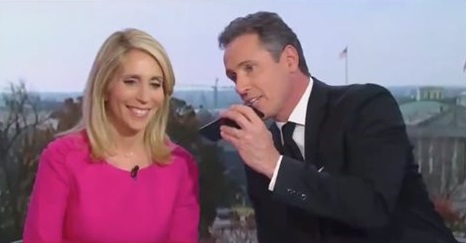 This “formal impeachment inquiry” has come full circle now, back into the media circus from whence it was born.

The “resistance”, supported all the while by the mainstream media, has been pushing to nullify the results of the 2016 election from the very moment the contest was considered final.  President Trump was already the “worst president” they had ever seen, well before he had even taken the oath of office.

The absurdity of this position was allowed to play out on national television time and time again, forcing the media themselves into a cycle of hyperbole that only sought to bring the political theater to their own overblown level.

Now, in a stunning stunt that failed painfully on CNN, anchor Chris Cuomo has exemplified this farcical escalation of rhetoric.

CNN host Chris Cuomo was mocked Thursday after his attempt to disprove President Trump’s theory about how phones work backfired on live television.

David Holmes, the political counsel at the U.S. Embassy in Ukraine, testified during Thursday’s impeachment hearing that he overheard a would-be damming phone call between Trump and European Union Ambassador Gordon Sondland. Holmes said he “could hear the president’s voice through the earpiece of the phone,” which was not on speakerphone.

Trump, in real-time, tweeted his skepticism.

“I have been watching people making phone calls my entire life. My hearing is, and has been, great. Never have I been watching a person making a call, which was not on speakerphone, and been able to hear or understand a conversation. I’ve even tried, but to no avail,” Trump tweeted. “Try it live!”

And “try it live” is precisely what Chris Cuomo did.

Because we are in the absolute dumbest timeline, Chris Cuomo calls his mom on live TV to disprove Trump's claim and demonstrate to viewers that bystanders can hear a caller on the other line…and we only hear his mother when he puts her on speaker. pic.twitter.com/Bif8QsmPHb

All Cuomo accomplished was to support President Trump’s claim that he could not have been overheard by Holmes.