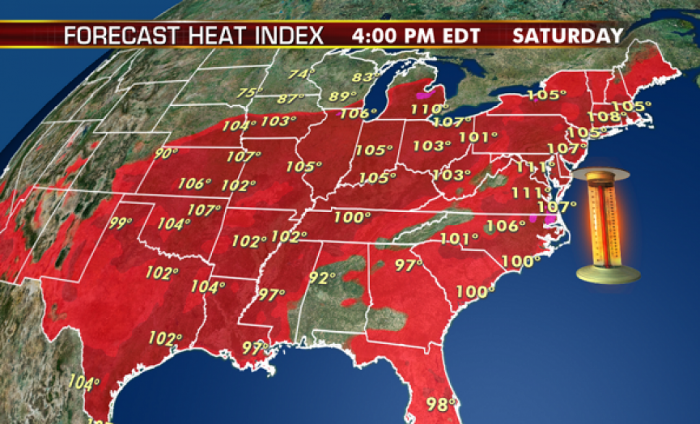 It will be as hot in Washington, D.C., as in Death Valley, California.

Over 200 million Americans in parts of the central and eastern U.S. will experience temperature indexes of over 100F as a heat wave is expected to slam at least 29 states over the weekend.

The temperatures have been heating up but officials are now warning that the hottest weather has yet to come as more than 100 local heat records are expected to fall Saturday, according to the National Weather service.

Temperatures around 100 degrees are possible in Washington, D.C, Baltimore, Philadelphia, New York City, Boston, Chicago, and St. Louis, AccuWeather said. For a while on Saturday, it will be as hot in Washington, D.C., as in Death Valley, California. 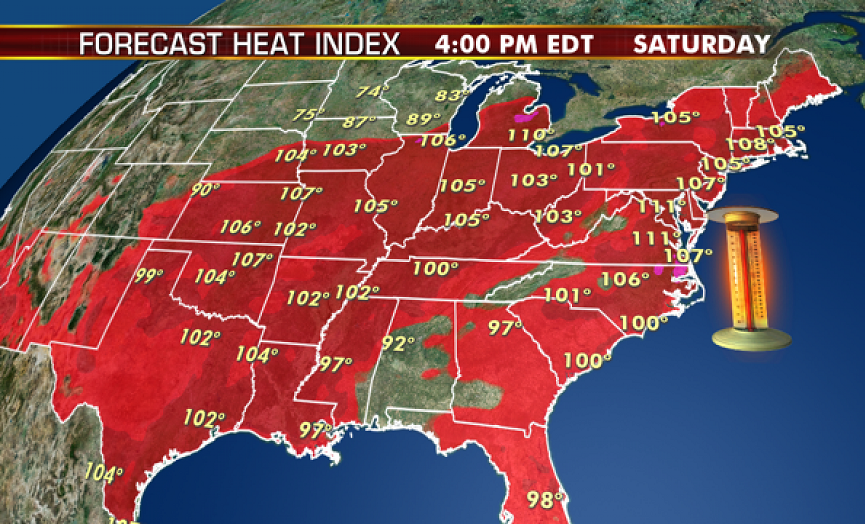 Dozens of record hot temperatures are likely, the National Weather Service said, as the heat index is forecast to surge past 100 degrees and approach the 110s in many areas. The heat index, also known as the apparent temperature, is what the temperature feels like to the human body when relative humidity is combined with the air temperature.

The weather service advised people to stay out of the sun, drink plenty of water, avoid alcohol, protect young children and pets and stay indoors with the air conditioning on. Authorities urged people to check on neighbors, especially those who are high-risk and senior citizens. The elderly, young children and people with medical conditions are especially at risk during the dangerous heat wave.

Heat exhaustion and heat stroke are the primary health issues emergency rooms could see. Both can occur after temperatures hit 80 degrees or the humidity rises above 75 percent, according to Eskenazi Health in Indianapolis.

Nights will provide little relief: According to AccuWeather, temperatures in many of the big cities may struggle to drop below 80 degrees at night, which then allows the heat to build at an even faster pace the next day. Nighttime humidity levels can be significantly higher than the afternoon as a result.

Some good news: The worst of the heat is forecast to ease by early next week, returning temperatures back to more typical July levels in the central and eastern U.S., the weather service said.