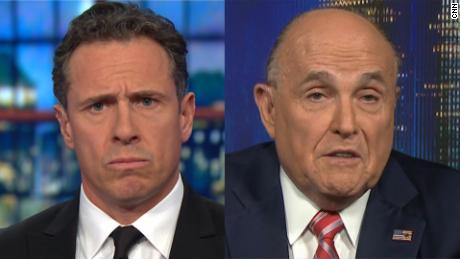 ‘Your network is a horror’: Cuomo interview with Giuliani degenerates into shouting match.

Chris “Fredo” Cuomo and attorney Rudy Giuliani got into a heated discussion on Thursday night. Why he bothers to go on the fake news network is anyone’s guess, he know they are not going to give him or President Trump fair coverage.

The interview quickly degenerated into a shouting match as the former mayor of New York City traded barbs that escalated steadily over nearly half an hour.

“You’re a sellout,” Giuliani told the CNN anchor at one point in the interview, adding Cuomo had opened the show with “totally erroneous” information and “completely spun” things.

And this is the result…

Giuliani accused Cuomo of being “totally biased” during a heated back-and-forth after the Trump lawyer denied that he had asked Ukraine to look into Biden before seconds later acknowledging that “of course” he had asked for such a review.

Cuomo to Rudy Giuliani: “Did you ask the Ukraine to investigate Joe Biden?”

Cuomo: “So you did ask Ukraine to look into Joe Biden?”

Cuomo to Rudy Giuliani: "Did you ask the Ukraine to investigate Joe Biden?"

Cuomo: "So you did ask Ukraine to look into Joe Biden?"

Rudy: "Of course I did!" pic.twitter.com/cuwTCvTcRn

via The Daily Caller:

A video surfaced on Monday of CNN’s Chris Cuomo yelling at a man who called him “Fredo” — a character from the movie “The Godfather” — while at an event in New York over the weekend.

“Fredo is from ‘The Godfather,’ he was that weak brother and they’re using it as an Italian aspersion,” Cuomo continued. “It’s like the ‘n-word’ for us.”

The headline is @ChrisCuomo says "Fredo" is like the N word for Italian people. Chris is smart, he can handle things, and deserves respect. https://t.co/Z2PGq9nCkE pic.twitter.com/YhgjFOPjQH

Cuomo is a pud. Will liberals get upset about this? Or just ignore it?