Third ISIS video in three days threatens, ‘We shall render [the White House] black with our fire, Allah willing.’ 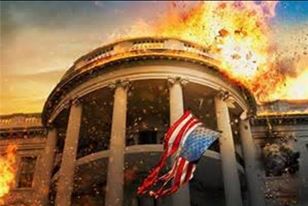 ‘The White House will turn black with our fire, Allah willing’: ISIS warns of fresh attacks on Washington in the third video to threaten America in as many days

ISIS terrorists have threatened to destroy the White House just a day after another video threatened a suicide bombing in New York in the wake of the Paris terror attacks.

Speaking in the footage, a jihadi with a long beard and dressed in a headdress and robe worn by many ISIS fighters, warns: ‘We started with [Paris] and we shall finish with the false White House.’

He continues: ‘We shall render [the White House] black with our fire, Allah willing.’

The professionally-produced clip was filmed in ISIS-controlled Dijlah province, to the north of Iraqi capital Baghdad, according to the Middle East Research Institute, which translated the footage.

A bearded jihadi, believed to be speaking from ISIS-controlled Dijlah, to the north of the Iraqi capital Baghdad, says the terrorists will ‘blow up [the White House] like we blew up the false idols in this good land’

It also bears the black flag symbol of the Al Hayat Media Center, the propaganda arm of ISIS that produces its infamous execution and recruitment videos.

It begins with another terrorist speaking in the middle of the street, making threats against France and the U.S. after both countries escalated bombing campaigns against ISIS in the wake of Paris.

Addressing the camera while using his index finger to point at the sky, indicating a reverence to Allah, the man says: ‘What do they expect from the nation of Islam other than more of these strikes?

He then goes on to say: ‘Allah willing, we shall roast them with [explosive] belts and car bombs.

The footage then cuts to black, before text appears in the tricolor of the French national flag, which reads ‘Paris before Rome’, as burning cinders float up the screen.

While it is not explicitly stated what this statement is referring to, it is likely meant as a threat against the Italian capital, which has been on high alert ever since 129 people were killed in Paris.

Italian authorities upped security in major cities and around cultural sites yesterday after the FBI warned of possible terrorist attacks there.

The footage then cuts to a second bearded jihadi, again wearing a headdress and robe, though this time he appears to be speaking outside, either in a garden or courtyard.

He says: ‘Oh crusader France, we shall pulverize your palaces, Allah willing you shall not know happiness and will not live for long.

‘We started with you and we shall finish with the false White House which we shall render black with our fire, Allah willing. We shall blow it up like we blew up the false idols in this good land.

‘Oh crusaders everywhere, know that you are under threat and that Allah had ordered us to fight you.’

The video is the third to propose an attack on the U.S. after footage released yesterday showed a man preparing a suicide vest before showing footage of Times Square in New York.

Despite the footage appearing online, mayor Bill De Blasio has said today that security forces are not aware of any specific threat to the city, adding that ‘New York City will not be intimidated’.

It has since emerged that the footage showing a man apparently assembling the bomb have been recycled from old ISIS footage, suggesting it was hastily put together after the Paris atrocity.

In another clip released two days prior to that one, the terror group again threatened to attack Washington DC, saying the capital city would be next after Paris.

In that video, men carrying AK47 rifles and standing in front of an armored vehicle vowed to attack every nation involved in airstrikes on Syria.

Speaking in Arabic, the men said: ‘We say to the states that take part in the crusader campaign that, by God, you will have a day God willing, like France’s and by God, as we struck France in the centre of its abode in Paris, then we swear that we will strike America at its centre in Washington.’

Despite the threats, FBI director James B. Comey held a press conference this afternoon to say that his agency are not aware of any specific threat against the United States. 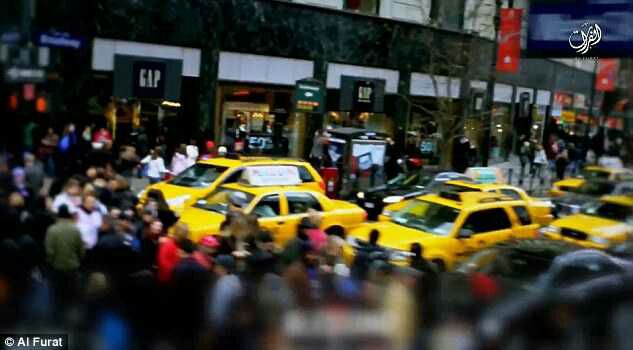 As well as France, ISIS claimed responsibility for an attack on a Russian passenger jet which came down over Sinai province in Egypt, killing all 229 people on board.

At the time the group said the attack was in revenge for Russia joining the air campaign against their group in Syria, and vowed further retaliation.

ISIS’s propaganda videos, such as this one, are an attempt to draw countries into armed conflict with them to satisfy their own warped interpretation of Islam.

According to ISIS doctrine, based on a distorted form of Wahhabism, the end of the world is approaching and will be marked by a final battle between Muslims and ‘infidels’.

They believe this battle will take place in the small village of Dabiq, northern Syria, which their propaganda magazine is named after.

After the final apocalyptic confrontation has taken place, the religion of Islam will sweep west, conquering Constantinople (modern-day Istanbul) and then Rome.

ISIS leaders believe that Islam is fundamentally incompatible with other world religions, and seek to create a worldwide caliphate subjugating everyone to their religion, or else killing them.