There is a 99% chance that this incident was 100% intentional. A person doesn’t just accidentally leave a razor blade right in the middle of someones sandwich.

With actions like this happening, why would anyone want to be a police officer these days? It’s a lose-lose situation, with the mainstream media and Democrats constantly finding ways to tear them down. Thankfully, there still are brave men and women who are determined to uphold the rule of law and do their best to keep all of us safe.

An NYPD cop got a sharp surprise when he bit into a sandwich at a Queens shop and cut his mouth on a rusty razor blade stuffed inside, police said.

The cop, a 24-year veteran of the NYPD, cut the inside of his mouth on the razor as he chomped on the cheesesteak. He was taken to Nassau Community Medical Center for a minor wound. 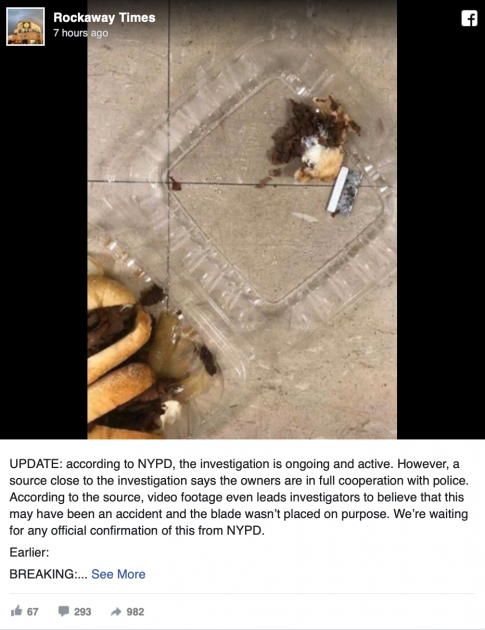 New York Police Department Commissioner Dermot Shea initially tweeted that the NYPD would investigate the incident and that violence against New York City police officers would not be tolerated.

“The NYPD has ZERO tolerance for acts of violence against our police officers. A sandwich bought at a Queens deli on Thurs. contained a razor blade that cut the inside of a @NYPDCT cop’s mouth. He’ll be OK, but a full investigation into this abhorrent act is underway,” said his initial tweet addressing the razor blade incident.

But after an investigation, the NYPD deemed that the razor blade incident was, in fact, an accident.

After a thorough investigation by @NYPDDetectives its been determined that the razor incident was indeed an accident-thankfully our officer or another customer wasn’t seriously injured. Appropriate agencies have been notified for follow up to ensure this never happens again. https://t.co/4Q42fUlQcR

“After a thorough investigation by NYPD Detectives, it’s been determined that the razor incident was indeed an accident,” Shea said on Twitter. “Thankfully, our officer or another customer wasn’t seriously injured. Appropriate agencies have been notified for follow up to ensure this never happens again.”

A statement was issued by Bon Appetit apologizing to the officer and said that they are undertaking an internal investigation to ensure nothing like this ever happens again.

“First, we would like to extend our deepest apologies to the officer involved in this unfortunate incident,” the statement read. “We use a variety of tools to prepare our food, but none should ever be found in any food item meant for customer consumption … In over 10 years of management in this location, we have never had an incident like this and look forward to providing the highest quality service to all of our customers in the future.”

Nobody has been charged in the incident.