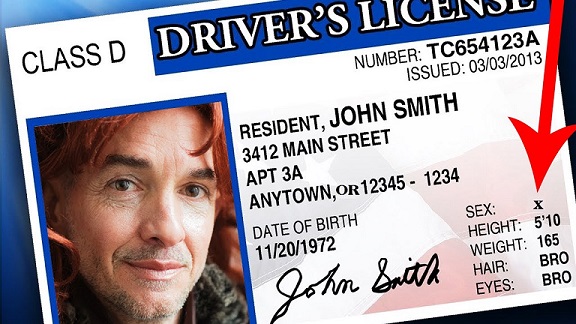 People who do not identify with their genetic sex can refer to themselves as ‘nonbinary’, which refers to any gender that is not exclusively male or female. These people usually go by they/them pronouns, but some will choose neo-pronouns.

In a decision reached by The Oregon Transportation Commission in June, Oregon is first U.S. state to allow residents to identify as “nonbinary” on their driver license and identification cards. No doubt, this will set the precedent for other liberal stats to follow suit in order to remain politically correct.

Beginning July 1, Oregonians were be able to choose “X” for sex instead of “F” or “M” on their licenses and identification cards. Applicants will have to pay replacement or renewal fees, Oregon Live reports.

Transgender and intersex Oregonians say the change validates their identities and makes them safer as they hand over their licenses at restaurants, health clinics and airports. Oregon Department of Motor Vehicles officials say they received little opposition to the change, which they first announced plans to carry out last summer. Of 83 comments, both written and oral, only 12 people opposed the change.

The testimony offered “important insight into some DMV customers that according to one of the witnesses are as common as redheads,” said Tom McClellan, the division administrator for the department. “People didn’t share their testimony. They shared their stories. They told us of their struggles so we would understand the need.”

The rule change follows a historic precedent set last year when a Multnomah County Circuit Court judge allowed Portland Army veteran Jamie Shupe to legally identify as neither male nor female. Legal experts believed the ruling was a first in the United States.

An estimated 20,000 Oregonians identify as transgender, according to The Williams Institute at the University of California-Los Angeles. A 2015 nationwide survey of 28,000 transgender people found that more than a third identified as neither male nor female.

Since Shupe’s win, judges in Polk and Benton counties have allowed transgender Oregonians to change their legal gender to neither male nor female.

California legislators also are considering a bill that would allow drivers to register as “nonbinary.” In Oregon, the change does not require a legislative vote because state law does not stipulate that a driver has to choose male or female.

Commissioner Sean O’Hollaren said he was glad the state had embraced the change.

“I hope those who will use X as an identifier will feel an element of comfort moving forward,” O’Hollaren said. “It’s something we’re not only doing because legally our hand is forced. It’s something we should do because it’s the right thing to do.”