Conservative actor and Trump supporter James Woods has been banned from Twitter for sharing a meme he shared from the Democrats. Woods hit back, accusing Twitter of being in the “censorship business.”

Woods was banned for the crime of meme sharing, after he tweeted an image in July originating on ‘internet cesspool’ 4chan. The image showed three effeminate men promising to stay at home in November’s midterm elections to “make a woman’s vote worth more.”

Woods commented on the post: “Pretty scary that there is a distinct possibility that this could be real. Not likely, but in this day and age of absolute liberal insanity, it is at least possible…” 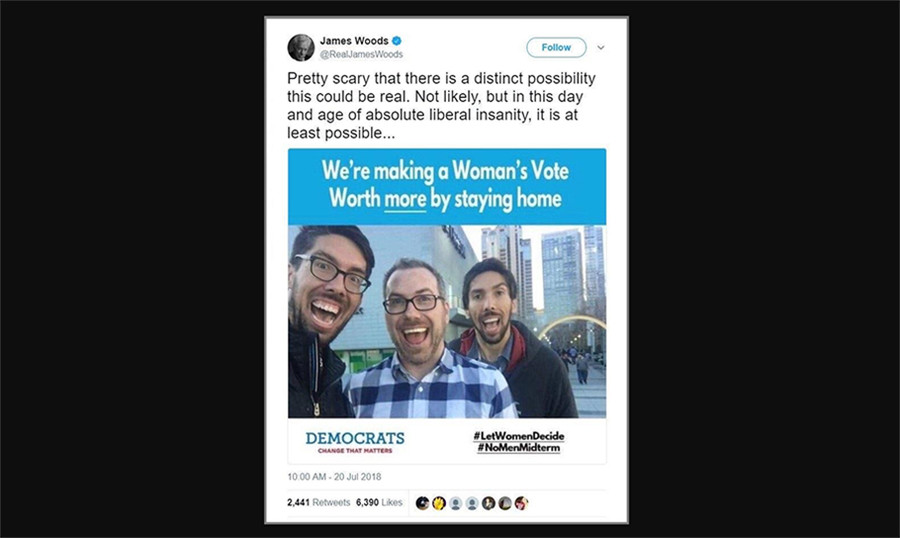 Twitter didn’t see the funny side. Almost three months after it was posted, the social media giant demanded he delete his tweet, which (they claimed) “has the potential to be misleading in a way that could impact an election.” He characteristically refused, saying that to do so would have disturbing consequences for freedom of speech.

“[…] having your voice smothered is much more disturbing than having your vocal chords slit,” he told the AP. “If you want to kill my free speech, man up and slit my throat with a knife, don’t smother me with a pillow.”

James claimed he was being singled out despite the fact that numerous other people had posted the same image, often without text qualifying that it was a hoax, due to the fact that he has 1.7 million followers.

He added that since Twitter “is now in the #censorship business,” he will no longer use its services and messaged his supporters on Twitter connecting his ban with a broader trend of bias against conservative voices on social media platforms.

Woods is something of a lone wolf in liberal Hollywood. While his fellow movie stars shed crocodile tears at awards ceremonies, and cook up elaborate revenge fantasies about President Trump, Woods spends most of his day posting pro-Trump, pro-gun, pro-anything that angers the liberal twitterati. To his fellow actors, Woods’ beliefs are somewhere to the right of Adolf Hitler.

From Mr. woods himself. With his permission I asked him if I could share with you all as I know how much you all adore him. #FreeJamesWoods @RealJamesWoods @Twitter pic.twitter.com/WxtpDESWKq

Conservative Twitter users have been quick to come to Woods’ defense, echoing his claim that Twitter is engaging in politically-motivated censorship, with the hashtag #FreeJamesWoods.

Twitter Nanny State silences @RealJamesWoods, one of the top conservatives on @Twitter with 1.7 million followers. Because he posted a funny meme … in July. This can’t be the kind of healthy conversation you want @jack. This is the kind the Soviets used.https://t.co/dPNhExfml7

Hey @jack, unlock @RealJamesWoods account. Stop silencing conservative voices over nothing. It's unAmerican. What does it profit you to win the midterms, if you lose the first principles of the country? #FreeJamesWoods

Others followed Woods in stating that it is Twitter’s actions, rather than the tweet itself, which are “influencing the elections,” while many more began sharing the meme which initiated the controversy in solidarity. Some even tagged Twitter CEO Jack Dorsey.

Twitter suspended James Woods for trying to "impact an election" because he posted a satirical meme.

Literally anything could be said to "impact an election".

This is just another excuse to censor conservatives.

This is real election meddling.https://t.co/eXvVIhwSAO

Hey @jack, unlock @RealJamesWoods account. Stop silencing conservative voices over nothing. It's unAmerican. What does it profit you to win the midterms, if you lose the first principles of the country? #FreeJamesWoods

Here it is, @jack. Now…what is it about this tweet that made you ban @realJamesWoods? pic.twitter.com/me2A7GiyJn

Twitter has not directly responded to the attacks, telling the AP that it does not comment on cases involving individual accounts due to privacy and security concerns.

Woods is far from the only figure on the right to feel the wrath of Twitter’s ban-hammer. Conservative pundit and conspiracy theorist Alex Jones was booted off Twitter, and a host of other online platforms in recent weeks, for ‘hate speech’ and ‘abusive behavior.’

Jones’ excommunication from Twitter came one day after Dorsey testified before Congress, where he insisted that Twitter was impartial and denied any bias against conservatives.

In an email to fans, Woods said that “this muzzle on free speech is a cancer that, if allowed to metastasize, will destroy this nation and everything it stands for.”

Woods’ brand of conservatism has made him something of an exile in Hollywood in recent years. While the veteran actor has more than 100 acting credits under his belt, his own agent severed ties with him in July, citing his conservative views.