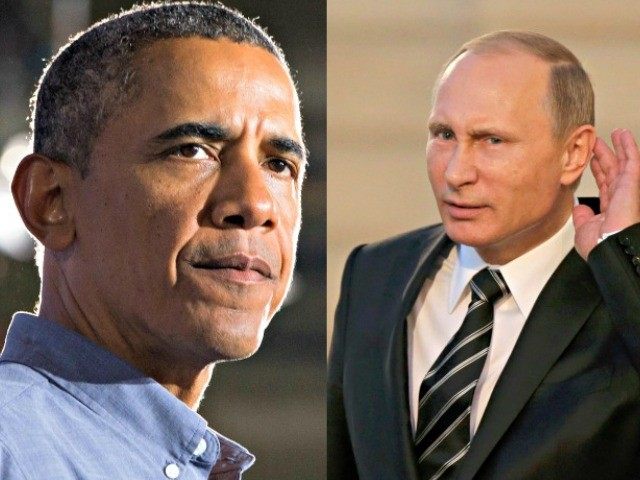 Last week, Russian President Vladimir Putin slammed President Obama saying that he is “not grounded in the real world… absolutely unprofessional politics.” This week, Putin says the Barack Obama administration has “mush for brains” given its lack of cooperation with Russians in Syria.

The U.S. and others have accused Russia of propping up the Assad regime by attacking “practically every group opposed to the Syrian government except the Islamic State, also known as ISIS or ISIL.” Now, Putin claims “the Russian government had asked for the coordinates of the groups that should or should not be attacked, the United States had not responded to either request.”

“Recently, we have offered the Americans: ‘Give us objects that we shouldn’t target.’ Again, no answer,” he said. “It seems to me that some of our partners have mush for brains.”

Officials in Washington have acknowledged reluctance to work with the Russians over “trust” issues.

First, they fear that the Russians might use the coordinates to target the groups the Americans do not want attacked. Second, Syrian opposition groups are already suspicious that the United States is coordinating with Russia on the attacks, a perception the Pentagon does not want to feed, the officials said.

In any event, by openly criticizing the Obama administration and claiming he’s been encouraging cooperation, it puts the ball back in Obama’s court in terms of perhaps requiring a further response from U.S. officials. Clearly, Putin is using Syria to put Russia back on the world stage, perhaps even on par with the U.S. That’s not a perception, or a reality, the U.S. likely wants to encourage.

Mr. Putin, speaking at a forum for international investors, also said that Washington did not seem interested in a visit he had proposed by a high-level political and military delegation to coordinate actions in Syria. The Russian delegation would be led by the prime minister, Dmitri A. Medvedev, and include senior military and intelligence officials, he said.

… Mr. Putin said the only coordination so far included basic military matters. Consultations on technical details like how to identify aircraft as friend or foe is “not enough,” he said — instead, the various forces inside Syria needed to be pushed to work together.

“If we want to be effective, if we want to not simply shoot and make missile strikes and reach a political settlement, then we need to motivate the forces inside the country — and this conflict is complex and multifaceted — for joint work between various forces on Syria’s territory,” Mr. Putin said.