The Russian gun activist who was arrested in Washington, DC is not an agent of the Kremlin and the Department of Justice (DOJ) is misusing the law to charge her as such, the attorney for Maria Butina said.

Butina, 29, was arrested on Sunday and jailed pending a hearing scheduled on Wednesday, the DOJ said in a statement on Monday. She was charged with “conspiracy to act as an agent of the Russian Federation within the United States without prior notification to the Attorney General.”

Charges against Butina are “simply a misuse of the Foreign Agent statute, which is designed to punish covert propaganda, not open and public networking by foreign students,” Butina’s attorney Robert Driscoll said in a statement.

"Maria Burtina is not an agent of the Russian Federation." – Statement I just received from her attorney. pic.twitter.com/DXyCBtWQV0

Butina voluntarily testified before the Senate Intelligence Committee for 8 hours “months ago,”Driscoll said, and produced “thousands of documents” to the lawmakers. She also offered to testify before the office of special counsel, “which has not expressed interest,” the attorney added. Rather than take her up on the offer to cooperate, the government arrested her “without prior notice to counsel.”

The government claims that between 2015 and February 2017 Butina “worked at the direction of a high-level official in the Russian government,” who was sanctioned by the US in April 2018. While the statement does not identify the man, he is presumed to be Aleksandr Torshin, a former Russian lawmaker and central bank official who has not held public office since 2015.

According to the indictment, Butina was “developing relationships with US persons and infiltrating organizations having influence in American politics, for the purpose of advancing the interests of the Russian Federation,” without registering with the DOJ as a foreign agent. If convicted, she could face up to five years in prison.

The FBI agent who signed the affidavit against Butina claims she was working to establish a back-channel between the Kremlin and the National Rifle Association (NRA).

Today Russian gun rights activist Maria Butina was charged with acting as an agent of the Russian government. Paragraph 31 of the criminal complaint quotes an explosive email about establishing a "VERY private line of communication" between the Kremlin and GOP via the NRA: pic.twitter.com/X2VNHobBlQ

Butina has been an outspoken activist for American values –  specifically, the Second Amendment right to bear arms – in Russia, however. A 2015 poster shows her holding an automatic rifle and a handgun, pointing out that Russian laws allow rifles but ban handguns for self-defense, and asking “Where is the logic?” 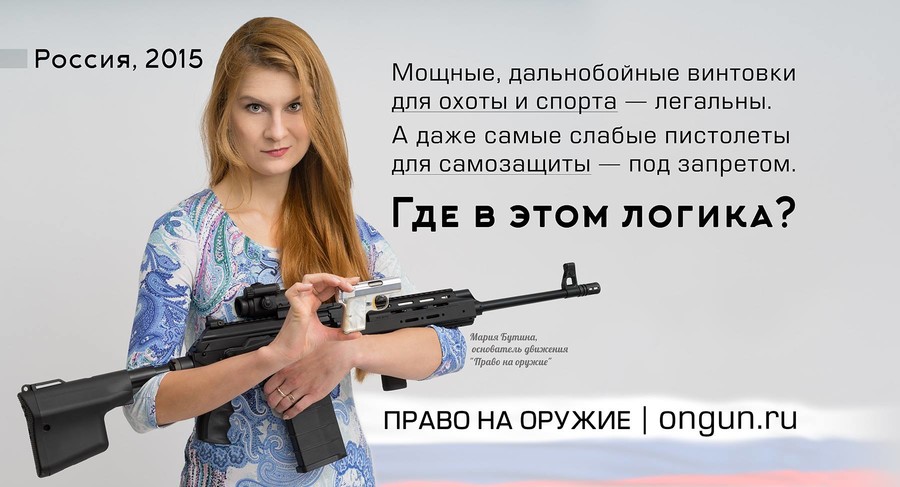 News of Butina’s arrest, which was revealed just hours after the summit between US President Donald Trump and his Russian counterpart Vladimir Putin in Helsinki, Finland, was met with glee in US political circles obsessed with alleged “collusion” between Russia and Trump.

Mariia Butina, a Russian national, has been charged with acting as a surreptitious Russian agent and establishing a secret back channel with the GOP through the NRA.

More likely to come on this; no wonder GOP members of HPSCI refused our request to bring her and others in. https://t.co/UWhoxHz3lr

As for the DOJ, the statement announcing the arrest and charges was accompanied with the standard disclaimer it appears few bothered to read, with a Twitter storm over another read-headed “Russian spy” rising immediately:

“The charges in criminal complaints are merely allegations and every defendant is presumed innocent unless and until proven guilty beyond a reasonable doubt.”