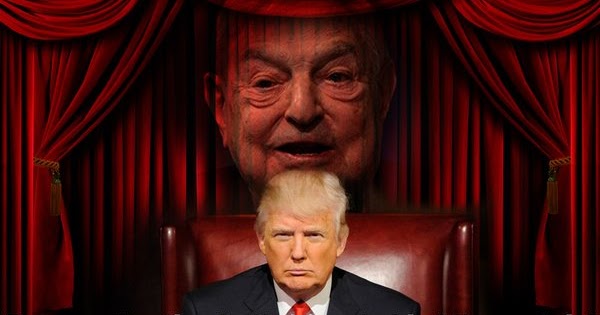 Anti-Trump protests in the United States have been organized by groups that are directly sponsored by Clinton sympathizer and close family friend, billionaire George Soros.

In fact, Donald Trump is under attack by 187 organizations that are directly funded by the Soros who has been meeting behind closed doors with top Democrats to plot a resistance strategy against President-elect Donald Trump and Republicans.

According to The Political Insider ,George Soros, the left-wing billionaire who funds Black Lives Matter and dozens of far-left socialist groups, is NOT happy that Donald Trump will be the next President of the United States of America.

And after liberals spent the last 6 years screaming about how the Republican Congress is “obstructionist” for not giving Obama everything he wants, now we know George Soros is planning to do everything he can to obstruct President Trump.

According to Politico, Soros and other key members of the so-called “Democracy Alliance” met in Washington, DC at the Mandarin Oriental hotel on Sunday for the first day of the group’s three-day investment conference.

The Democracy Alliance has funneled upwards of $500 million toward liberal activist groups and candidates since Soros co-founded the group in 2005.

Therefore, at this year’s meeting, Soros and other liberal leaders — including Nancy Pelosi, Elizabeth Warren and Keith Ellison — will discuss opposing Trump’s plan for his first 100 days in office, a plan the DA called “a terrifying assault on President Obama’s achievements, and our progressive vision for an equitable and just nation.”

Isn’t it funny how liberals can “obstruct” the president, and it’s “patriotic?”

Thanks to WikiLeaks, we know all about George Soros and how deeply he’s tied into the Democrat Party. One set of emails shows Hillary’s campaign manager Robby Mook and top aide Huma Abedin talking about making Soros happy:

The emails, hacked from the account of Clinton Campaign Chairman and Soros ally John Podesta, disclose that Clinton was advised to do fundraisers simply to make Soros “happy.” They also indicate the 85-year-old Hungarian-born heavyweight, through his top aides, freely reached out to Podesta to make Soros’ wishes clear on issues ranging from trade to migration to the Supreme Court.

But that’s not all. The anti-Trump riots we’ve seen in liberal cities all across the country are linked to Soros, too:

It’s clear that Soros and the politically-connected rich Democrats he works with will stop at nothing to destroy traditional American values and turn us into just another socialist European welfare state – unless Americans put at stop to it.