“Syria is a dead state, and Israel must understand this and prepare accordingly,” Amos Gilad, the director of the political-security division in the Defense Ministry and a former senior Military Intelligence official, told a cultural event in Beersheba.

The nation state of Syria has collapsed, a fact that Israel must internalize about its northern neighbor, a senior Israeli defense official said Saturday.

“Syria is a dead state, and Israel must understand this and prepare accordingly,” Amos Gilad, the director of the political-security division in the Defense Ministry and a former senior Military Intelligence official, told a cultural event in Beersheba.

“[Syrian President Bashar] Assad’s grip on the country is faltering, it is a land without rule,” Gilad said, according to Army Radio.

With swathes of Syria falling into the hands of opposition forces, including jihadist groups, Assad has increasingly relied on support from allies Iran and the Lebanon-based terror group Hezbollah, both sworn enemies of Israel.

During a September meeting in Moscow, Prime Minister Benjamin Netanyahu told Russian President Vladimir Putin in “no uncertain terms” that Israel would not tolerate Tehran’s efforts to arm its enemies in the region, and that Jerusalem has taken and will continue to take action against any such attempts.

Netanyahu told Putin that Iran and Syria have been providing Hezbollah with advanced weapons, thousands of which are directed at Israeli cities. “At the same time, Iran, under the auspices of the Syrian army, is attempting to build a second terrorist front against us from the Golan Heights.”

The prime minister also said that Israel’s policy is to prevent these weapons transfers “and to prevent the creation of a terrorist front and attacks on us from the Golan Heights.” Netanyahu came to the Kremlin to “clarify our policies, and to make sure that there is no misunderstanding between our forces,” he said.

Russia is currently conducting air strikes in Syria that, while ostensibly targeting the Islamic State group, have also attacked Assad’s Western-backed foes. But a senior Israeli military official said Thursday that the Israel Air Force will still operate as normal in Syria, thanks to constant coordination between Tel Aviv and Moscow.

Five years of fighting in Syria have also seen a sharp increase in the number of Druze residents on the Golan Heights seeking Israeli citizenship.

In contrast to the only two requests filed in 2010, the number of Golan Druze seeking citizenship rose to 80 so far in 2015, Channel 1 reported earlier this month. 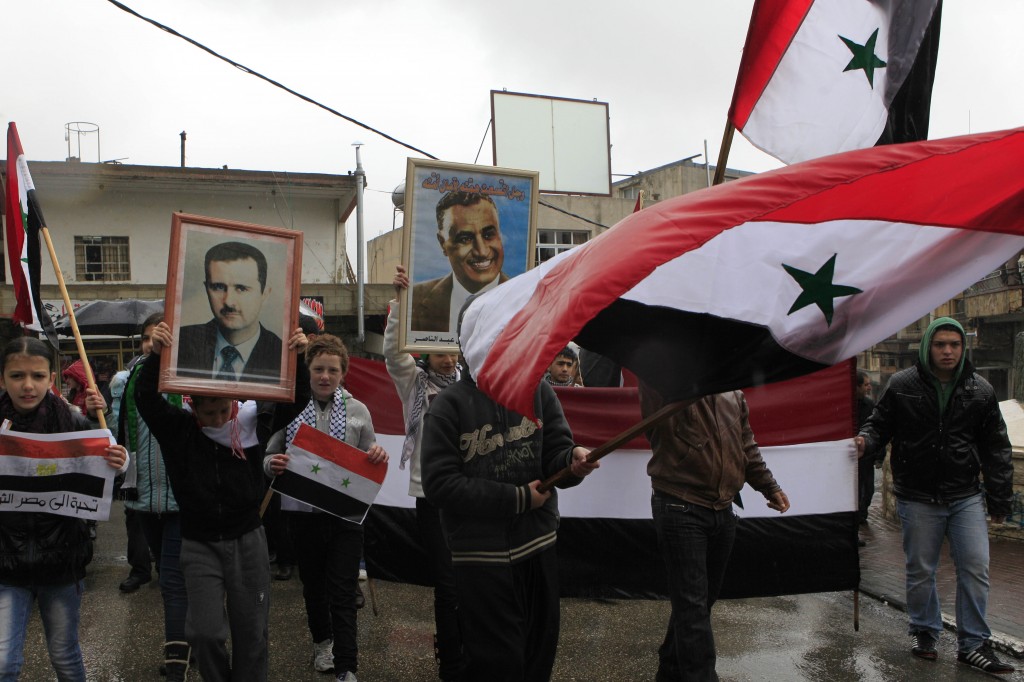 Illustrative: Druze march in support of Syrian President Bashar Assad in the town of Majdal Shams on the Golan Heights. (Tsafrir Abayov/Flash90/File)

Citing government statistics, the television report said that some 151 Druze have become naturalized Israeli citizens since the bloody war broke out in Syria in 2011.

According to the report, the majority of the applications have been filed by Druze youths, whose connection to Syria has likely been marred by the violence there.

The marked increase in applications could be an indication that the community’s 45-year-long loyalty to its Syrian homeland has become fractured by the raging war across the border.

In addition to disillusioned youth, some Golan Heights Druze are embracing Israeli citizenship out of a fear of widespread persecution in Syria if Assad’s regime — a government that protected the minority group — falls, or is forced out of power.