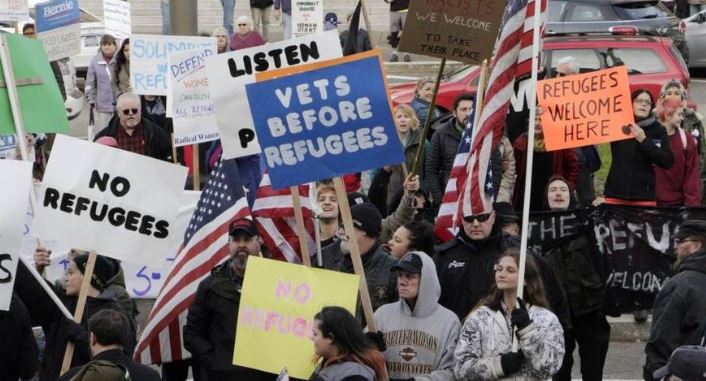 President Obama is desperately seeking new locations to place Syrian refugees as he ramps up the “surge” of more than 350 Syrian arrivals per week in an effort to meet his goal of 10,000 Syrians resettled by Oct. 1.

Take for example a small city in Vermont, the home of socialist Sen. Bernie Sanders, where 100 Syrian refugees are being placed, and they are not getting an altogether warm welcome.

In fact, Leo Hohmann, WND reported that when residents of Rutland, Vermont, found out about the secretly negotiated deal to seed their community with migrants from a Middle Eastern hotbed of Sunni radicalism, they were livid.

They packed a local library for an “informational” meeting Thursday night. At least 20 of them stood outside with protest signs, demanding that their mayor explain why he negotiated the entire deal with the federal resettlement contractors behind closed doors and outside the purview of public scrutiny.

Mayor Chris Louras simply “announced” on April 26 that 100 Syrians were being “welcomed” into the city after it was a done deal.

Even the Boston Globe acknowledged the Rutland refugee placement was “developed in near-secrecy” by the mayor and the government contractor.

And in each new town that gets told, not asked, that Syrians are coming, the response has been divisive, with some locals saying they welcome the foreign “diversity” and others saying they have questions and fears.

Another 75 refugees are headed to small communities in northern Nevada, it was reported by KUNR, an NPR affiliated radio station.

Northern Nevada International Center, which operates on the campus of the University of Nevada at Reno, has been given the green light to start a refugee resettlement program. Carina Black, the group’s director, told KUNR the group’s application to become an official resettlement contractor was approved in February, meaning the plan has been in the works since at least late last year. But the local residents are only now finding out about it.

“Stakeholders” from health care, education, employment and faith communities have been “coming forward and showing a huge interest in helping us,” Black said. “So we’re still basically conducting a lot of training … and getting ready for this new endeavor.”

Black said her organization will resettle up to 75 refugees over the fiscal year that begins Oct. 1.

Black did not return calls to her office Friday by WND seeking more information.

Read the full story at WND.