A Texas police officer, Don Allen, 27, was found murdered in his home just hours before another officer in Illinois was gunned down in the street on a morning patrol.  He was found by family members around 7pm., and is the third police officer murdered in less than a week.

Three cops murdered in less than a week: Another officer is found slaughtered in his Texas home amid growing safety fears and a manhunt for the Illinois cop killers who got away

A Texas police officer was found murdered in his home just hours before an officer in Illinois was gunned down in the street on a morning patrol.

Don Allen, 27, was killed at home some time Monday evening in Clyde, Texas, and found by family members around 7pm.

Authorities have not released details of his death, but launched a homicide investigation over Allen, who has served in the Abilene police department for three years.

The discovery of the dead officer comes at the same time as police in Fox Lake, Illinois, have launched a search for three armed suspects in the death of an officer.

Charles Joseph Gliniewicz, 52, died of gunshot wounds Tuesday morning in the Chicago suburb, prompting a search for three suspicious men he was chasing just before he died.

Officer Allen’s death also came just days after a sheriff’s deputy, Darren Goforth, was shot dead at a gas station near Houston while filling up his patrol car.

The latest killing – the third in less than a week – has prompted fear among other officers. 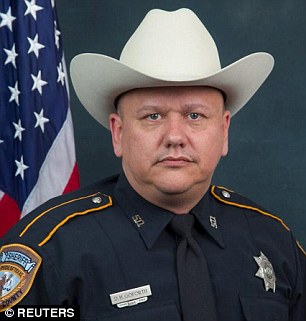 Another police death: Darren Goforth was shot dead outside Houston on Friday

According to CNN, Abilene police chief Stan Standridge said: ‘The initial reaction was fear. Why was Officer Allen chosen?

‘That speaks volumes as it relates to how vulnerable are we. … We look like we’re prepared for anything.

Allen, who had worked as a police officer since his early 20s, had recently got engaged.

Abilene’s chief of police, Stan Standridge, described him as a ‘great man and great peace officer’ who was dutiful and respected by his peers.

Standridge said: ‘This family is heartbroken over the loss of their loved one, as is our police family. Parents should not have to bury their children, and this family certainly needs our love and prayers during this time.’

Allen is due to be buried later this week.