A medical report has concluded that Freddie Gray broke his neck after falling head-first into the back of the police van as it was moving, it is claimed.

Police Commissioner Anthony Batts revealed a private security camera captured the van making an unknown stop. So far, he has refused to elaborate on the details of the new information.

A privately-owned security camera revealed that there was a mysterious stop made along the route. The stop will be integral to the police investigation into Gray’s death, which has been completed and handed to the state prosecutor. 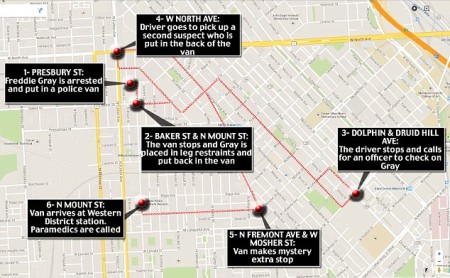 The investigation has not revealed why the van stopped at the corner of North Fremont Ave and Mosher Street before it made another two stops then finally transported Gray to the hospital. Gray died of a severe spinal injury a week later.

The details surrounding exactly what caused Freddie Gray to slam his head into the back of the van is unclear. The officer driving the van has not given a statement to authorities yet. It’s also unclear whether Gray’s head injury was voluntary or was a result of some other action.

Sources briefed on the police investigation told ABC News Gray’s head injuries were consistent with hitting a bolt ‘in the back door of the van’. They claimed there was ‘no evidence’ Gray sustained a fatal spine injury during his arrest, which was caught on camera outside on a street side on April 12.

According to ABC’s sources, Gray was standing in the van, bent over with his hand cuffed behind his back and his head pointing towards the back door.

It is believed he fell into the door, breaking his neck. If Gray was properly restrained, it is unclear how he fell forward.