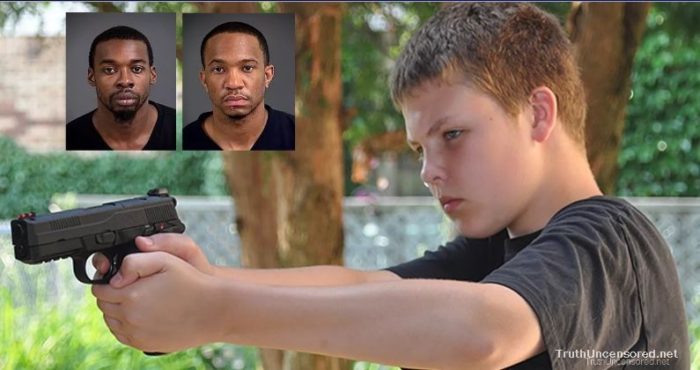 A 13-year-old boy fended off two hardened felons who were attempting to break into his house by using his mother’s gun to protect himself while home alone.

The boy saw the men breaking into the back of his home, “at which time he feared for his safety,” and grabbed his mother’s gun, the document states. He began firing at them, and the Sheriff’s office reported that they returned fire.

In a heated shootout, the boy shot Brown three times, and Bennett drove him to the hospital where he later died. The gray Chevy Sonic they were driving had bullet holes in it from the boy chasing them, the affidavit states.

Where was the media coverage of this brave young man’s heroic act, how about a Tweet from President Obama commending his bravery. Without the protection of his mothers gun the boy, and his mother, who was due home later that afternoon, would both be dead.

According to reports the young boy, who is not being identified, was home alone when he grew suspicious of a car that pulled up outside around 1:30 p.m. Moments later, the two suspects went to the back of the house and attempted to break in, at such time, the boy, fearing for his safety, grabbed his mother’s handgun.

As the suspects tried to break into the back of the house, the boy opened fire, but the suspects reacted by returning fire before fleeing from the scene.

The boy chased the suspects out of the home and continued to fire as they fled in their vehicle. The boy, who was uninjured, then called his mother, who instructed him to call the police.

Neighbor Debbie Griffin said she called police after hearing about six shots ring out. She added that her son was outside at the time and heard more shots and witnessed the attempted burglary. He told her he saw the suspects’ car parked behind the house.

Investigators combed the area around the boy’s home and discovered a Colt .45 pistol, which was believed to belong to the suspects.

A short time later, one of the suspects, who was later identified as Lamar Anthwan Brown, 31, was dropped off outside the emergency room of a nearby hospital. Brown, who was shot three times, died at the medical facility.

The second suspect, Ira Bennett, 28, later turned himself in to authorities. He was charged with first-degree burglary and possession of a weapon during the commission of a violent crime.

Lamar Anthwan Brown, (L) 31, of Summerville, died at Trident Medical Center of gunshot wounds. Bennett, 28, (R) of North Charleston has been charged with first-degree burglary and possession of a weapon during the commission of a violent crime.

What’s truly amazing about this story is that the two men were no strangers to crime, with both having extensive criminal histories.

Brown was convicted six times on felony drug charges, in addition to unlawful carrying of a weapon, disorderly conduct and trespassing.

The boy’s mother, who is just thankful her son is safe, said she kept the gun in the home for personal protection, but she never taught her son how to use it.

“I tell my kids that if anything ever happens to call 911, but I also tell them to protect themselves if they have to,” the mother said. “I never would have dreamed that this would have been a part of our day today.”

The boy, who homeschools and is typically home with another family member during the day, did not wish to talk with reporters, but according to neighbor Debbie Griffin, who witnessed part of the attempted burglary, the boy wished the shooting never would have occurred.

Imagine what the outcome could have been for him and his mother when she returned home from work if he had not been smart enough to use the gun to defend himself and his home.

While Democrats and liberals insist that guns are not safe and stricter gun control is needed – there is ample proof, as in this case, that there is more need for gun safety to be taught rather than instilling fear. Obviously, this boy was taught how to use the gun and it saved his, and probably his mothers life as well.

If anything, the boy deserves recognition for taking hardened criminals off the street.