Barrack Obama has been mistreating our veterans for years.  It’s no wonder our military personnel are angry and lashing back.

At the beginning of Obama’s campaign for the presidency in 2007, he said, “When 400,000 veterans are stuck on a waiting list for claims, we need a new sense of urgency in this country.” He was repeatedly warned of the abuses with VA hospitals, but only took action in the sixth year of his presidency when the trouble turned into a scandal. 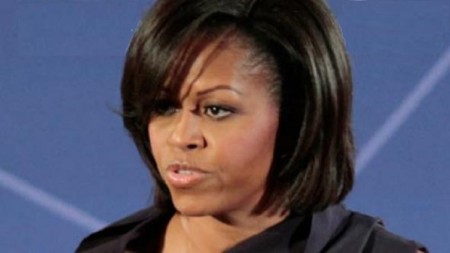 Under the Obama administration unemployment rate for military veterans is significantly higher than for the population as a whole.  This is especially true for younger veterans.

Under the Obama administration, many military veterans have had to pay to have their medals shipped to them.  For example, one soldier actually had to pay a 21 dollar shipping fee to get his Purple Heart.  The following is from the Huffington Post:

War comes with an incalculable human cost. And apparently a shipping fee of about $21.

Retired Sgt. Major Rob Dickerson says that’s the price he was forced to pay when his Purple Heart — the medal issued to soldiers wounded in action — arrived at his door, C.O.D.

Instead of being awarded the military honor in a formal ceremony, the vet with 29 years in the service was handed his award, and a shipping invoice, by a FedEx deliveryman outside his Sioux Falls, S.D., home.

Marine veteran Mike Shepard decided to let Michelle Obama know exactly what he thinks of her in a bombshell letter that was leaked to the press.

Black-themed website TheGrio reported that Michelle’s aides “less than pleased” that the letter is being circulated.

Here it is Shepard’s letter to Michelle:

It sickens me that I have to take time to write you this letter. I am a Marine who doesn’t recognize color because every color has lived and died for you. You live in a free country to blame your life on the color of another man’s skin. All colors have given their lives for an educated woman to have the freedom to be so ignorant. I don’t blame black people for the ignorance that comes from your mouth.

You both live better than 99% of the people in this world because of this country. You said that you are for the first time proud to be an American. Well, I will tell you that most of us are ashamed of you. You and your husband have become millionaires off the people of this country, but demonstrate very little appreciation for all that we give. White, black, brown or indifferent millions have fought and died for you to have the freedom to say the ignorant things you say. You are educated, but clearly have very little common sense. You blame past generations of Americans for the troubles of a few.

Stop blaming white people for your misery and take a look at yourself in the mirror. We are responsible for our own happiness and misery. The KKK is ignorance wrapped in a sheet while the Black panthers are raised on ignorance and hate. No different from the teaching of Islam thinking their race is better than all other men. God is love and creates every color to include everyone’s skin. To truly love God is to love all that He loves. For that I love each of you and pray that we all start taking responsibility for our own damned sins.

Martin Luther King had a dream that we would all live in the promise land. He is not remembered for being black. He is remembered for the love, and character he had within his heart. If you don’t like this country get on that plane and never come back. I will stay here and love all Americans, regardless of skin. I will love the beauty of what God created and stand tall with my American friends. Not because of their color but for the character and love they carry within. This country doesn’t owe you anymore than it owes me. So many have thanked me for my service and I will always be grateful. I pray that one day you and your husband might cause me to be grateful for yours.

You will never be remembered as the First Lady of Color but soon forgotten after you leave the White House. You nor your husband shall ever divide us. I wish you no harm, but pray you will take your troubles to a land you no longer hate. Hate shall come and go but His love shall last forever.

If you wish to find me I am now a writer for the DC Gazette. Also on Twitter @mshep08_mike …God bless you and Semper Fi